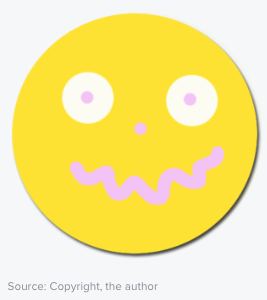 But could too many blissful ideas in a dangerous world be a bad thing?

Calm down, worry warts. It seems that the positive psychologists are right. Thinking happy thoughts may not be a panacea. But over recent years, some psychologists have devised exercises and activities that they’ve shown can help people feel better for hours … days … and sometimes a week or even a month or two. And, no. People don’t get hurt feeling better.

“Nine Beautiful Things” is the title of a new positive psychology approach by researchers in Germany and Switzerland. Each evening for seven evenings in a row, people write about “things” they’ve encountered that day. (This “nine-thing” exercise is a “3 x 3” extension of positive psychology exercises developed by other researchers. One was a log of three beautiful things. One was a “three good things” log. The third was a list of three funny things.)

Here’s where the science comes in:

The test of Nine Beautiful Things as a way to improve feelings of well-being was placebo-controlled and conducted exclusively online. All participants were given standard happiness and depression inventories. People scoring as having clinical levels of depression were steered away from the remainder of the study.

People in the placebo group made a seven-day log of early memories. Everyone else created a seven-day log of … you guessed it. Each day three of those nine beautiful things were about human behavior. Three were about the natural world. And three were more generally about pleasing moments or objects. When logging their day’s beautiful things, people in the study also wrote about why they personally experienced as beautiful each item they’d noted. According to lead author René T. Proyer, participating in the experiment required about ten minutes a day—or a total of 70 minutes over seven days.

About half of the 113 study participants completed the study. According to Proyer, while that drop-out rate seems large, it’s standard for online studies because researchers have no way to encourage participants to log in again and again.

After seven days of taking careful note of nine beautiful things, study participants showed small-to-medium increases in measures of happiness. Those scores remained statistically significant one month later. At the two-month mark the happiness scores dropped to about where they’d been at the start of the study. Scores of symptoms of sub-clinical depression dropped after seven days of noting nine beautiful things, but that benefit stopped being evident about two weeks after the last log entry. Three and six months after study participants posted their last entry, happiness and depression scores were about where they’d been at the study’s outset. According to Proyer, “At least that showed that making careful note about beauty causes no harm.”

This all sounds about right to me. When I was raising my often grouchy children I had a good friend who had two grouchy sons. In her (I now realize) infinite wisdom, my friend always insisted that her sons “say three nice things” about whatever it was that was currently ticking them off. To my surprise, they always complied. (I don’t believe either of my children would have.) And saying those three nice things did seem to make them a little more willing to stop being crabby, at least in the short term.

My friend was practicing positive psychology, though she probably didn’t know it. But what parent dealing cheerfully and optimistically with a cranky child is aware of his or her own brilliance?

And if you’re feeling cross and bitterish
Don’t sit and whine
Think of banana split and licorice
And you’ll feel fine….

Those lyrics by Lee Adams are from “Put On a Happy Face,” sung by Dick Van Dyke in the 1963 musical Bye Bye Birdie. If I hummed that song for ten minutes each evening for seven evenings in a row, would “grey skies are gonna clear up” actually come true—at least for a while?  Maybe. Maybe not. But, as Proyer found about his Nine Beautiful Things intervention, it would probably do no harm.